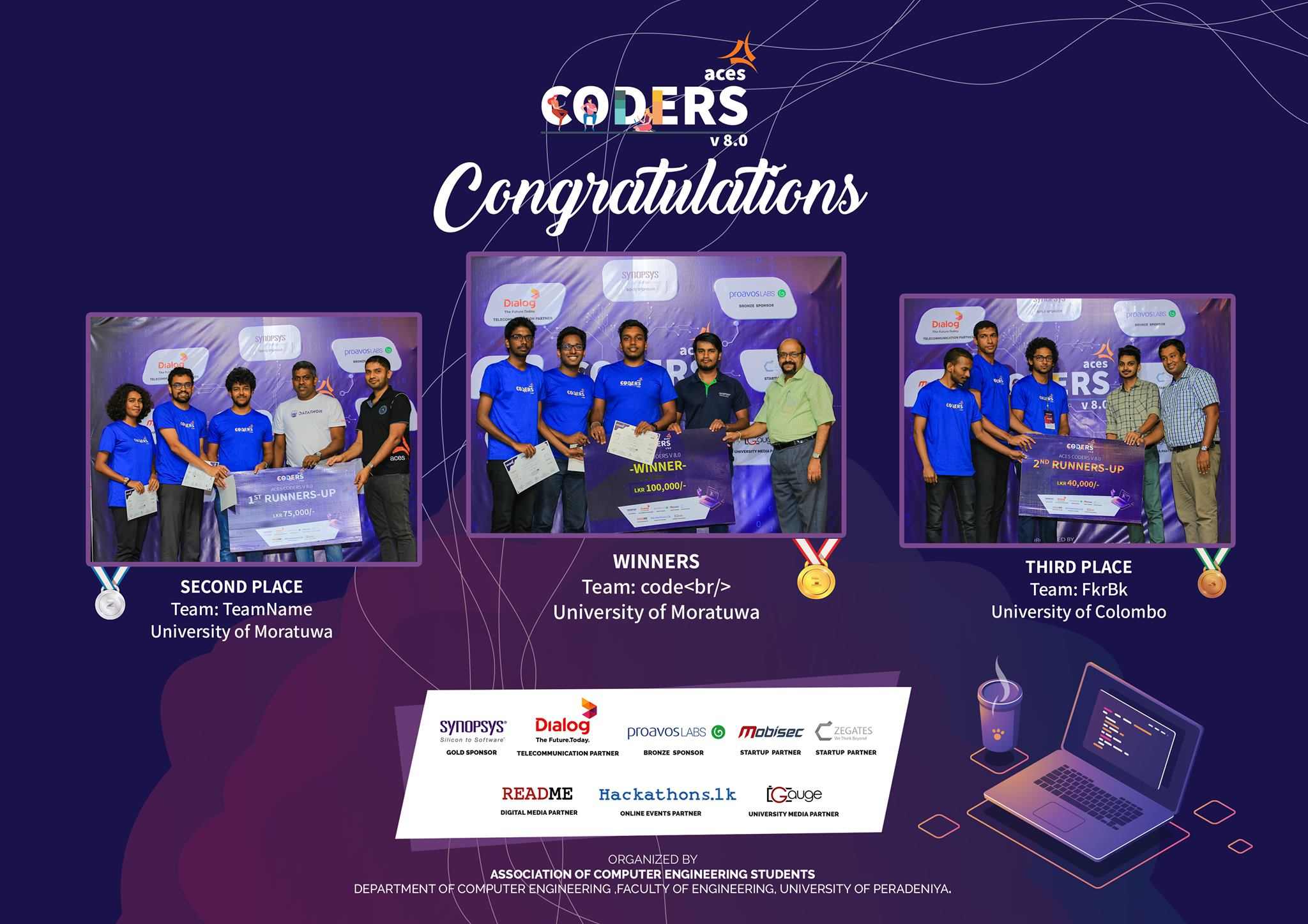 The leap day of the year 2020, was an extra special day for several coding enthusiasts from all across the country, as they were supposed to gather at the Faculty of Engineering, University of Peradeniya for the largest onsite coding competition of the country, ACES Coders Version 8.0.

ACES stands for the Association of Computer Engineering Students, and, is the official student body of the Department of Computer Engineering at the Faculty of Engineering, University of Peradeniya. It holds several events annually, and the largest of them all is ACES Coders, which is an inter-university coding competition. The event kicked off in the minds of a few students who participated in and were inspired by, the IEEEXtreme which is also a similar coding competition that lasts for 24 hours. These students, in 2011 have decided that they need more of such events to hone their coding,
particularly, competitive coding skills, which resulted in the initiation of ACES Coders version 1.0.

Since then, ACES Coders was held annually, improving in all aspects, and with the number of participants growing each year. Starting from the Coders version 1.0, it still is a 12-hour coding competition and is held overnight, to keep the excitement.

Fast forward to 29th February 2020, ACES Coders version 8.0 was scheduled to be started at 4.30 pm. Participants from all across the island arrived by noon and most of them utilized the opportunity by going for a short walk, sightseeing the beautiful university of Peradeniya. Participants this year represented around 20 institutions, including the University of Colombo, University of Moratuwa, University of Sri Jayawardenapura, Eastern University of Sri Lanka, University of Jaffna, South Eastern University of Sri Lanka, SLIIT, NSBM Green University and many more. It was great to see the level of enthusiasm of these young coders to take part in an event held miles away from their residencies and spend a sleepless night of coding there.  By 4.30 pm, the participants gathered at the E. O. E. Pereira Theatre and the event was commenced. An Introduction Video was followed by the traditional lighting of the oil lamp. The president of the ACES welcomed the gathering. The Head of the department Dr. Kamalanath Samarakoon also took the opportunity to address the crowd. He highlighted the importance of events of this caliber which unites the undergraduate coders under one roof and allows them to compete for one goal while improving their analyzing, problem-solving and coding skills. Then the chief guest of the event, Professor Gemunu Herath – Dean of the Faculty of Engineering, University of Peradeniya also shared his thoughts with the audience.
Rules and regulations of the event were then announced by Professor Roshan Ragel and then the participants were sent to the drawing office where the Coding competition was held.

The spacious Drawing Office provides reason to how the ACES can host the largest onsite coding competition in Sri Lanka, in the university premises itself. The Drawing Office has enough space for all 105 teams which is equal to 315 participants along with the organizers and special guests which amount to about 500 individuals. There was enough space for the backdrop area where everyone enjoyed getting themselves photographed during the short breaks they decided to take while coding.

The coding competition started at 6 pm. Here the participants were given access to Hackerrank where the problems were posted one after the other throughout the 12 hours the competition was held. The students could attempt the questions in any order they preferred, and any combination of group members could attempt a problem, but only one submission per group was taken. Points were given based on the solutions designed, and
the group which scores the highest number of points was chosen as the winner.  The interesting fact was that the online leaderboard was continuously getting updated so that each of the 105 teams could see their stand during the competition!
As the night deepened, the competition got more intense and started hitting the nerves of the participants. The busy bees were buried in their laptops competing harder and trying to score more points.  Refreshments were served from time to time, to shake off the monotonicity and exhaustion
of continuous coding, and the participants started hovering around the Nescafe machines trying to turn coffee into code!

The 12 hours flew by, and by 6 am the next day, the teams were done coding for the competition. They were served breakfast and then were assembled once again in the E. O. E. Pereira theatre for the awarding ceremony. Professor Roshan Ragel took the stage to speak about how the competition went, the average performance of the teams, etc.
ACES did not forget to acknowledge the sponsors: The Gold Sponsor – Synopsis Lanka, Telecommunication partner – Dialog Axiata, the Bronze sponsor – Proavos Labs, the startup partners – Zegates and Mobisec, with tokens of appreciation for their support and generosity; And then it was the time to award the winners. Cash awards were presented to the top
three teams and certificates of participation were awarded to all the participants.

Write up by : Nithya Kularathne 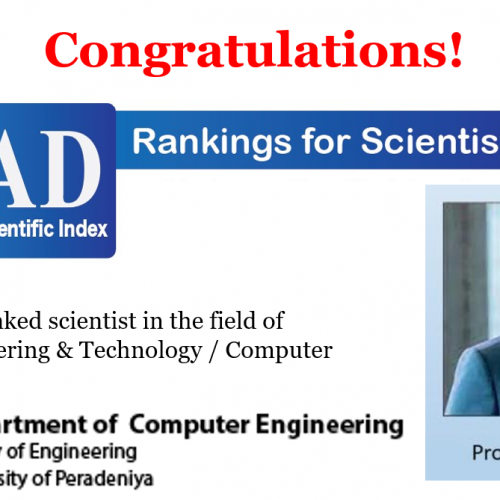 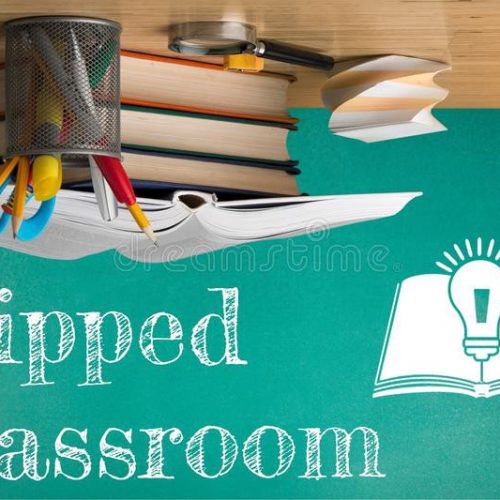 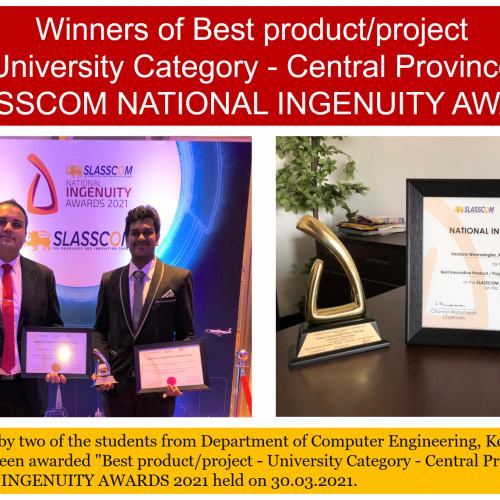